Internet of Things is becoming a part of our lives as more and more businesses realize the potential of IoT solutions to increase their competitiveness. Recent research from IoT Analytics, a leading Hamburg-based market research/industry analyst provider of market insights for the Internet of Things, M2M, and Industry 4.0, has provided a valuable snapshot of the state of the IoT sector.

The research covered 1600 projects in over 70 countries around the world that have been unveiled publicly and then analyzed them, allocating them into 10 primary categories. There were over 760 suppliers and vendors of IoT solutions covered by the projects, focusing on software, hardware, or connectivity services. The summary of the results is highlighted below. 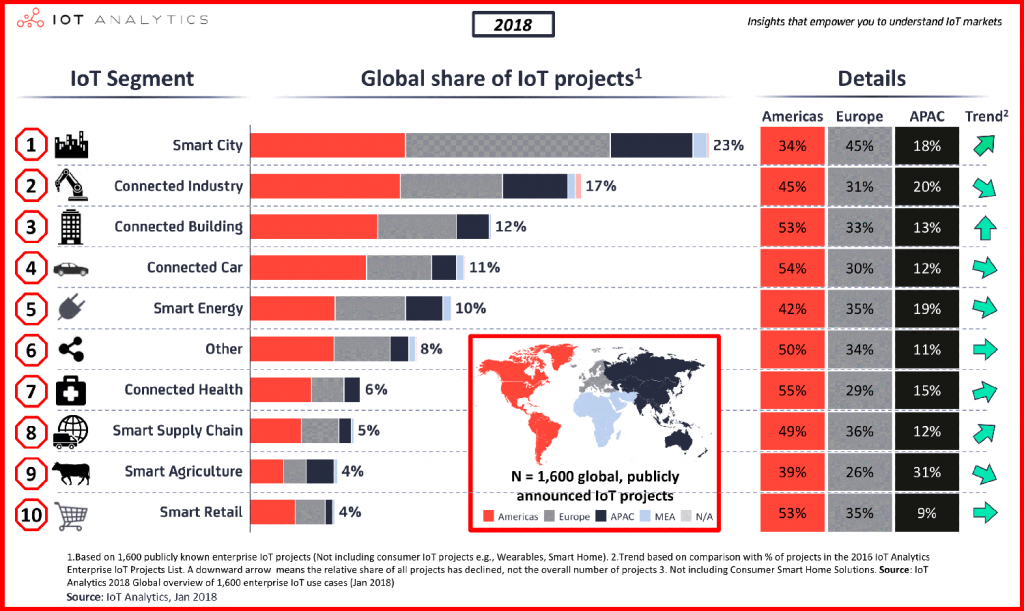 As the research shows, almost a quarter of all projects are within the Smart City segment, with projects in the Connected Industry being the second-highest category.

Smart City projects can cover a wide variety of fields but are often linked to:

Interestingly, it is only in this category that Europe accounts for a higher proportion of projects in an individual category than in the Americas.

Conversely, it is noteworthy that within the health sector, there are considerably more projects – both as a proportion and as a total number – being implemented in the Americas than in Europe or elsewhere in the world (with the Americas responsible for 55% of all projects). Given the potential within the health sector, this would indicate that there is an untapped awareness within the sector in other parts of the world and an area that IoT developers could look to grow.

Connected Industry, despite a downward trend over the past two years, accounts for almost a fifth of all projects. This segment covers projects both inside and outside of traditional industrial spaces, such as factories. There remains noticeable interest in implementing such Industrial IoT solutions as asset tracking and monitoring, which can help with predictive maintenance, or with enabling smart reductions in energy uses and costs, for example with smart lighting management.

This cost driver is similarly illustrated in one of the categories that has demonstrated major growth in the past two years, that of Connected Buildings.

It was the Connected Buildings sector that grew the most out of all sectors. Projects within this field aim to build a single connected environment controlled via a single operating system. The majority of these projects are linked to more efficient use of energy sources, with the cost factor being a major driver, while another aspect includes building security.

One of the categories that often gains the most visibility is that of the Connected Car, and it seems that the use of IoT software development within the commercial fleet sub-sector is really increasing. Issues regarding vehicle diagnostics and fleet maintenance solutions (77% and 57% respectively) were present in projects in this sector, with specific functions including remote control of vehicles and real-time tracking.

Businesses working across the automotive sector are increasingly making use of the possibilities and opportunities that are offered. One example is a car manufacturer that performs a range of pre-production tests, such as gas emission, endurance, engine performance, fuel consumption and so on. Managing the network of sensors has proven an excellent way to collect, process and utilize the range of data from vehicles and vehicle components which allows to automate the testing process and reduces testing costs.

The IoT Analytics research further provided some interesting insights into the regional differences between the projects that are being implemented around the world. It is noticeable that the Asia-Pacific is strong in projects linked to Smart Agriculture – this being the only sector where the proportion of APAC projects lies in second place – while, as mentioned, Europe is strongly present in the Smart Cities sector.

This likely reflects the larger importance of agriculture as an economic sector within APAC economies, while the European element within the Connected Cities may reflect the larger role that municipal and metropolitan authorities play in the region, notably in public transportation.

While a large proportion of the projects within the Smart Cities segment do cover transportation, environmental monitoring and public safety, along with utilities and lighting, are also important. 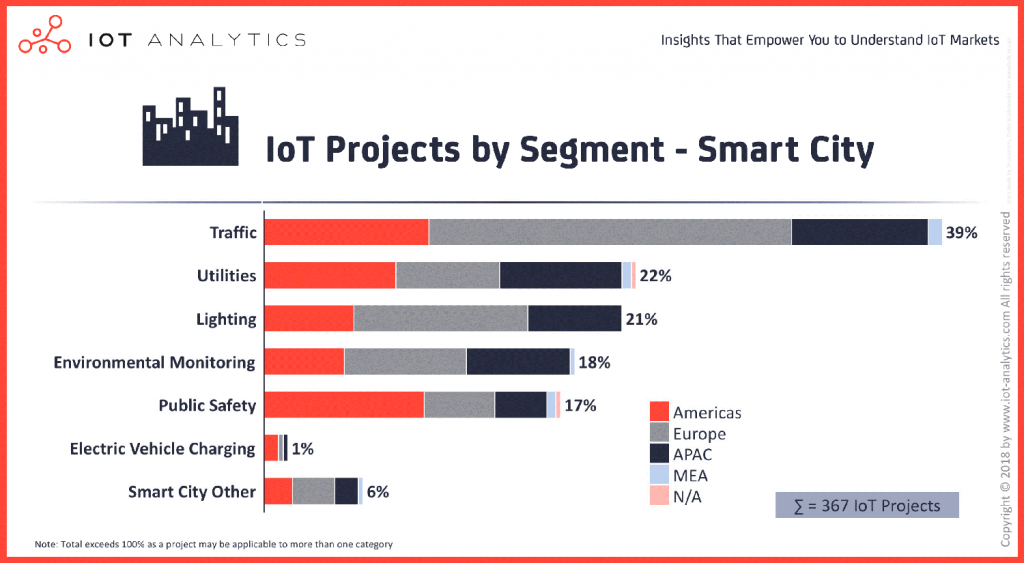 Environmental monitoring within cities often focuses on air quality, with the increasing presence of Nitrogen Oxides having increasingly become an issue in recent years. One project in London illustrates this, with a mobile “smogmobile” being used to monitoring air quality, gas emissions and so on. It is interesting that city authorities are taking more steps in this area, particularly in Europe, and this may be a response to both public pressure as well as European Union enforcement action.

Given the publicity surrounding electric cars, it is somewhat surprising that the number of projects that are to do with Electric Vehicle Charging are so few, both in terms of total number and as a proportion. It may be that this will increase in the coming years as electric vehicles become more popular, but cities will have to work with IoT developers to take full advantage of the various possibilities.

Summing up, the research shows that IoT is being exploited in sectors all around the world. However, there are still plenty of opportunities there for users, companies, IoT developers and public authorities to take advantage of or to develop anew.

How Internet of Things Changes the World: Trends & Cases from IoT Tech Expo 2017

How IoT is Influencing PCB Design and Manufacturing